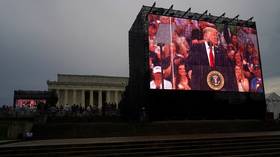 Wiser Americans are turning away fro their boorish President

Diplomacy and mediation require respect, historical knowledge, and empathy – the latter being the ability to see the perspective of others without necessarily agreeing with them. Trump shows none of these qualities. And with the diplomatic corps having been gutted of personnel during his presidency, there is little recourse for wiser counsel to offset this president’s boorish, bullying manner.

Trump’s mercurial character makes him unreliable as a partner. He is prone to turning nasty on a dime even to people whom he has at one time lauded as being friendly with. Witness his erratic behavior towards Chinese President Xi Jinping or French leader Emmanuel Macron. Trump seems to have no brake for his big mouth, or care about the consequences.

The G7 summit later this week in Biarritz will be a telling spectacle of how isolated Trump has become on the world stage. Previous gatherings have shown disregard and peevishness from other leaders. The forthcoming meeting promises to be even more cringeworthy because of Trump’s increasingly tarnished image.

Trump’s overbearing egotism and mental meltdown make him a person whom others are learning to ignore.