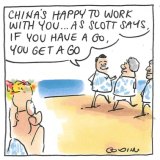 China might be using more coal but it’s making the greatest efforts not to. Leaving Australia out in the coal (ODT)

But his hard-line stance during negotiations angered some Pacific leaders, including Fijian Prime Minister Frank Bainimarama.

He said Australia’s position had weakened the Pacific’s position on the climate change, adding it was “disappointing that we could not achieve a unanimous consensus”.

“While there has been a great deal of agreement, it is clear that there are differences of opinion, emphasis and approach between the island nations and New Zealand, on the one hand, and Australia on the other,” he said.

Mr Bainimarama said he would make attempts to persuade Australia to make a more rapid transition from coal to energy sources that “do not contribute to climate change” when he visits next month.