Hoping to show Europeans they have an alternative to the prevailing system of “authoritarianism” and austerity, former Greek finance minister Yanis Varoufakis has announced a new cross-continent movement with a “simple, common agenda:” To democratize Europe. The movement, known as the Democracy in Europe Movement 2025 (or DiEM 25), will be launched on February 9 at Berlin’s Volksbühne theater. 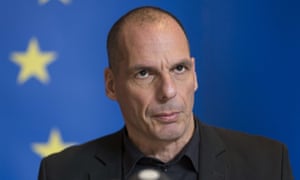 Barely a week after receiving a mandate from parliamentary electors to combat the Brussels-driven austerity that has wrecked Greece’s economy and afflicted its population for half a decade, Syriza Finance Minister Yanis Varoufakis confirmed his party’s intentions to fight EU oppression by saying he would not negotiate with representatives of Greece’s “hated troika of lenders.”

“We respect institutions but we don’t plan to cooperate with that committee,” Varoufakis said, referring to the auditors who review Greece’s accounting on behalf of the European Commission, the European Central Bank and the International Monetary Fund. “Our first action as a government will not be to reject the rationale of questioning this program through a request to extend it.”

Varoufakis, an academic with the University of Athens, had just emerged from a talk in Athens on Friday with Jeroen Dijsselbloem, head of the Eurogroup of EU finance ministers. In a visibly tense press conference alongside Dijsselbloem, Varoufakis added that Greece would not seek an extension to its $270 billion bailout.

“This platform enabled us to win the confidence of the Greek people,” he said.

As The Guardian noted in its report on the conference, Greece has lost more than a quarter of its GDP as a result of budget cuts and tax increases “enforced at the behest of creditors.”

Varoufakis and Greece’s new prime minister, Alexis Tsipras, said their government would deal only with individual institutions and ministers within the EU.

Varoufakis made headlines just before the election when he promised to “destroy the basis upon which they have built, for decade after decade, a system, a network that viciously sucks the energy and economic power from everybody else in society.” He made the statement in replying to a journalist who asked: “What will you do to [Greece’s] oligarchy, concretely?”

For standing his ground against intransigent EU officials indifferent to the suffering of their fellow Europeans, we honor Yanis Varoufakis as our Truthdigger of the Week.