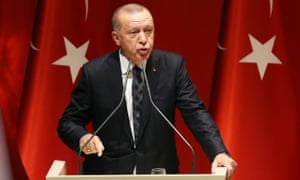 While Europe has scant influence over what happens next, the US has plenty – but seems determined to throw it away. Despite denials, it is clear from the White House statement issued on 6 October that Donald Trump rashly agreed to Erdoğan’s invasion, without consulting his allies, and facilitated it by withdrawing ground forces.

It was a disastrous decision the US is belatedly scrambling to correct. Betraying the Kurds, comrades-in-arms in the fight against Isis, was bad enough. Appearing to abandon Syria to Russia and Iran, America’s rivals and the main backers of Bashar al-Assad’s criminal Damascus regime, was a big strategic own goal, capping eight years of post-Arab spring US policy failures.

via Erdoğan has managed the unthinkable: uniting all the other Middle East rivals | World news | The Guardian