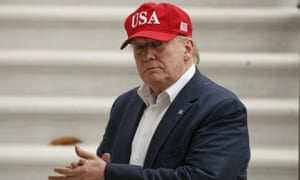 America’s Grifter in Chief. How to make it appear you have won when you’ve gained nothing. (ODT)

He did not cite examples of reporting that had angered him, but in the afternoon the Times cited “officials from both countries who are familiar with the negotiations” when it said Mexico agreed the steps contained in the deal “months earlier” in meetings with former homeland security secretary Kirstjen Nielsen.

Trump, who spent the day at his golf course in Virginia, did not immediately respond to a report which also said it was unclear if he “believed that the agreement truly represented new and broader concessions, or whether the president understood the limits of the deal but accepted it as a face-saving way to escape from the political and economic consequences of imposing tariffs on Mexico”.