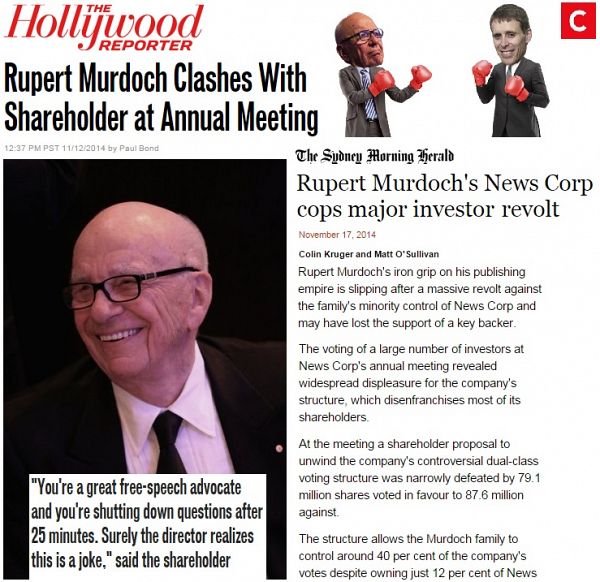 News Corporation AGM’s run by Rupert Murdoch in Hollywood are about as undemocratic as you can get, however a shareholder revolt suggests this may not be the case for much longer. Former News Ltd executive Rodney E. Lever reports.

A faithful attendant at most, if not all, of the annual general meetings of News Corporation has been Stephen Mayne, the founder of news website Crikey.

Rupert Murdoch has virtually abandoned Australia now so, as a shareholder, Stephen flies to America for these occasions — perhaps because it nearly always provides a good story.

After his visit to the most recent one, on 13 November, he opened his report in Crikey with this line:

‘Rupert Murdoch has done a lot of ducking and weaving to avoid answering questions at his AGMs over the years, but this morning’s effort at Fox Studios in Los Angeles was arguably his most brazen.’

Stephen was one of only ten shareholders at the meeting and probably the least welcome.

Each shareholder is provided with a document that sets out the ‘rules and procedures’.

Stephen Mayne said that many companies have limits on questions and timing, but usually there is debate that could take an hour or more. Not, apparently, when Rupert Murdoch is in the chair.

In Australia, every new resolution must be discussed and debated. American law allows debate even when several resolutions are involved.

Rupert Murdoch opened the meeting with a 15 minute oration and then offered the microphone for questions, but only two questions would be accepted from any shareholder and each limited to one minute at a time.

When Stephen asked for the microphone, one of the company lawyers, who shouldn’t have even been on the stage, told him the question rules would be strictly enforced for him. Stephen is known as a keen shareholder and a regular at these annual affairs.

He wanted to know two things: How was Rupert managing his time as executive chairman of two companies (News Corporation and 21st Century Fox)? And was Lachlan Murdoch, as co-chair of 21st Century Fox, running part of the meeting? Then he snuck in another question, but nobody seemed to notice: this was to ask why did the Murdoch family members took out a total salary of $64 million in 2014?

Rod Eddington, a News Corp director and former airline manager, took the questions and said Rupert was paid less than the two wealthiest chief executives of other media companies.

Proxy adviser Glass Lewis recommended a vote against the question.

“… there were no meaningful protest votes.”

This despite 20 per cent of the non-Murdoch votes opposed the re-election of James and Lachlan Murdoch and close to a quarter the executive remuneration package.

In Australia and Britain votes on executive remuneration are unlawful and come under the control of the Australian Securities and Investments Commission.

So the meeting continued with the Lachlan question unanswered. Rupert said he could handle his two roles and, what’s more, all the key executives ‒ James Murdoch, Chase Carey and Robert Thomson ‒ had offices in New York next to Rupert’s own.

A shareholder named Aaron Epstein, asked a question and got a laugh saying he hadn’t come from Australia but rather North Hollywood.

“It was most disappointing to think that the two grandsons were sitting mutely on stage alongside their father as he embarrassed the family yet again.”

When no one got up and we were still just twenty minutes into the meeting I returned to the microphone, and management again attempted to prevent any more discussion saying I was already in breach of the rules having asked two-and-a-half questions.

I blustered through, appealing for fairer treatment and the company’s great track record on free speech. Rupert reluctantly agreed to one last question, which turned into an omnibus about the delisting of Fox from the Australian Stock Exchange and the Time Warner takeover bid.”

Rupert Murdoch said the company had been expecting a deluge of Australian selling but had been surprised that many had instead chosen to hold on.

Mayne says Murdoch brushed aside another question about his failed attempt to take over Time Warner and he dismissed the question about why voting shares hadn’t been offered, saying it wasn’t an issue that came up with the directors. The bid failed because he wasn’t prepared to increase it by USD$10 a share.

As the meeting was coming to an end, a security guard took Mayne’s microphone away. An elderly shareholder then stood up and asked about the potential for higher dividends.

With no microphone, Rupert adjourned the meeting and then he remembered that he should have closed it first.

“Any plans to retire, Mr Chairman?”

A second meeting held a few days later, again at 21st Century Fox Studios, produced a shock for Murdoch that might silence some of his recent bluster.

It was the knowledge that News Corp’s second biggest stock holder after the Murdoch family, Saudi Prince Alwaleed bin Talal, had voted against Murdoch for the first time.

Murdoch’s family owns only 12 per cent of News Corps Class B common stocks, but controls of 40 per cent of the company with about 80 million shares. He has controlled the company since he inherited it in 1952, always maintaining a majority of voting rights.

Prince Alwaleed holds seven per cent of voting rights. His father is King Abdullah, far richer than Alaweed and Murdoch combined. The Prince’s past support for Murdoch after nearly 18 years, has always been taken for granted. Analysts have pointed out that only a small group of “insiders” have benefited from this arrangement. Now the Prince appears to be an insider no more.

After the Los Angeles meeting Wall Street’s stock reports were showing 53.7 million votes against Murdoch’s re-election as chairman of the company. But he still has 112 million votes in his favor. Could this change?

Murdoch suffered an even closer shave on the day, when a shareholder proposal to unwind News Corp’s controversial dual-class voting structure, which maintains Murdoch family control despite only owing a small fraction of the stock, was narrowly defeated by 79.1 million shares in favour to 87.6 million against.

There is bound to be more news to come.