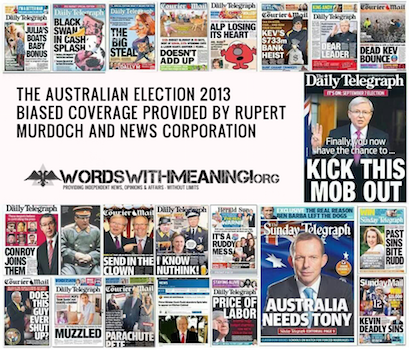 Hey lefties! The gig is up: The ABC IS biased.

Our system of democracy relies on transparency. If vested interests can get closer to power by donating money, then the public has a right to know about it.

The refusal by federal Liberal MP Russell Broadbent to answer questions about his multiple attendances at political fundraisers hosted or organised by an alleged Mafia boss underlines why the system of political fundraising in Australia needs an overhaul.

If politicians will not answer these questions, and our system of disclosure shines no light on them, then the public must place its faith in the phrase: “Trust me, I’m a politician.”

Our system of democracy relies on transparency. If vested interests can get closer to power by donating money, the public has a right to know about it. But the current disclosure system only forces a donor to declare a donation over $12,800.

When pressed, many politicians are reluctant to shed light about fundraising events or the true motivations of donors.
Advertisement

According to barrister Geoffrey Watson SC, who is the counsel assisting the NSW corruption watchdog ICAC, many who donate want the ear of a politician and a chance to influence a political decision – access not open to non-donors. Watson says the checks and balances around this money-for-access system are abysmal.

For his part, Broadbent is unwilling to explain how much he or his party received in donations linked to Mafia. The public is also left guessing about the motivation of these donors.

As early as the 1990s, Broadbent was being cultivated as a political contact by certain Calabrian fruit wholesalers, including Tony Madafferi. Police have repeatedly alleged in open court that Madafferi is an organised crime figure. For Broadbent, there should have been obvious warning signs around Madafferi, the donor, including the fact that Madafferi or his associates were after something from their political contacts.

Broadbent started going to fundraisers with Tony Madafferi at the same time Madafferi and his associates were lobbying Broadbent and other politicians to help get a visa for Madafferi’s criminal brother, Frank, who police wanted to deport back to Italy because he was a violent Mafia thug. (Tony Madafferi was named in court proceedings by police throughout the 1990s as a suspected crime figure, but, unlike Frank, he has no criminal convictions and denies any wrongdoing.)

Because Broadbent will not answer questions, it is hard to know when the Liberal MP first learnt of the serious (and public) criminal allegations about Tony or Frank Madafferi.

Broadbent has also not explained why he attended a 2004 fundraiser hosted by Tony Madafferi and attended by other alleged crime figures, and which was held – at least in part – to thank the politicians who had taken an interest in the Frank Madafferi visa campaign. Also attending this fundraiser were other Liberal MPs (including Bruce Billson, who said last week he was deceived by a Liberal donor about Frank Madafferi’s past) who had lobbied to get Frank Madafferi a visa on the grounds that his deportation to Italy would affect his wife and children.

All Broadbent has said, in seemingly selective comments given to the ABC, is that he did not lobby to get Frank Madafferi a visa. Perhaps “lobbying” is too strong a word.

But Broadbent did allow Tony Madafferi and his supporters, who also happened to be Liberal donors, to meet him and, on at least one occasion, to make their case. Broadbent also contacted the immigration minister’s office and inquired whether such a visa could be granted.

It is logical to believe the Madafferis and their associates believed Broadbent had taken an interest in the visa matter and could potentially use his power to assist, whether he was willing to or not.

Watson says the visa lobbying shows that “for no better reason than the making of donations to a political party, specific representations were able to be put to the most powerful politicians in the land”.

Broadbent has also offered no explanation as to why he attended a 2013 Liberal Party fundraiser hosted by Tony Madafferi and held in a reception centre part-owned by his drug-dealing brother, Frank.

By then, it was pretty hard not to know that Tony Madafferi was an alleged crime figure. It had been splashed all over the papers and aired in court. Much of the coverage was to do with the fact Frank Madafferi had won his visa battle. He was granted the right to stay in Australia in November 2005 on humanitarian grounds by the then immigration minister Amanda Vanstone, despite police warning he was a nasty gangster. Frank Madafferi was later arrested for drug trafficking and is now in jail.

Broadbent presumably knew some of this when he wandered into Tony Madafferi’s 2013 fundraising event. So how many donations did the Liberal Party receive at this event? And how many goods and services did Tony Madafferi also donate (remember, he and his brother Frank own the reception centre where the fundraiser was held)?

No one knows the answers to these questions, because the individual amounts donated fell below the disclosure threshold. It is also impossible to know what, if anything, donors asked of the politicians in the room (including the unwitting guest speaker, Victorian Liberal leader Matthew Guy).

If politicians will not answer these questions, and our system of disclosure shines no light on them, then the public must place its faith in the phrase: “Trust me, I’m a politician.”

But not even top Liberal Party fundraisers are buying this any more. After the recent revelations about the Mafia’s political donations, former chief Liberal fundraiser Michael Yabsley called for major reforms and warned the system is vulnerable to corruption. He says donations should be capped at a few hundred dollars and many organisations should be banned from giving them.

Federal Labor MP Gary Gray has also highlighted Labor’s voluntary declaration of any donation over $1000, while urging the Abbott government to back an overhaul. The minister responsible, Michael Ronaldson, has, so far at least, said this is not necessary.

So how did Broadbent respond to our latest effort, just this week, to get him to answer questions about the stench his own actions have created? Just silence. Which, to me at least, translates into: “Trust me, I’m a politician.”