“I pointed out that in dealing with terrorism, one has to know the causes,” Dr Mahathir told journalists after emerging from a bilateral meeting with the Australian Prime Minister. “Adding to the causes of terrorism is not going to be helpful, I pointed that out. And Australia has not made any decision, they are looking into it.”

Source: Indonesian MPs claim Australians could be targeted in terror attacks in response to Israel rethink

The Malaysian king has agreed to grant an immediate pardon to the twice-jailed former opposition leader, Anwar Ibrahim, clearing the way for his re-entry into politics and eventual ascent to the prime ministership. 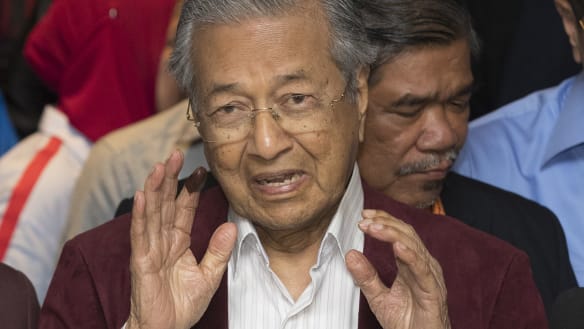 Mahathir used security laws to put his political opponents behind bars. His critics say he restricted free speech and persecuted political opponents – none more so than his former deputy, Anwar Ibrahim, who remains in jail on charges of sodomy and corruption.

Mahathir has joined hands with Anwar in this campaign and has promised to seek a royal pardon for him. He has vowed to then step aside and let Anwar be prime minister.

Mahathir was masterly in playing to the feelings of the mainly Muslim ethnic Malay majority. His 1970 book, The Malay Dilemma, argued that ethnic Malays, whom he called the nation’s rightful owners, were being eclipsed economically by ethnic Chinese.

via At 92, former strongman Mahathir is Malaysia’s comeback kid

Boat With Hundreds of Migrants From Myanmar Heads Farther Out to Sea – NYTimes.com.