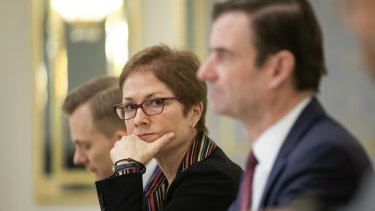 Republicans have called for the release of the transcripts as Democrats have held the initial interviews in private, though Republican lawmakers have been present for those closed-door meetings.

Laying out the anatomy of a chilling smear campaign, former US Ambassador to Ukraine Marie Yovanovitch told House investigators in a transcript released on Monday that Ukrainian officials warned her in advance that Rudy Giuliani and other allies of President Donald Trump were planning to “do things, including to me” and were “looking to hurt” her.

The former envoy, who was pushed out of her job in May on Trump’s orders, testified that a senior Ukrainian official told her that “I really need to watch my back.”

via Impeachment: ousted US envoy to Ukraine felt threatened by Trump, transcript shows