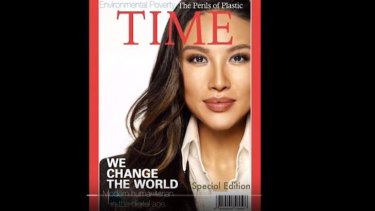 Trump does this himself so therefore it must be alright(ODT)

The fabricated Time cover is just one in a string of Chang’s listed accomplishments and resume line items that has come into question after an NBC News investigation found the 35-year-old Trump appointee embellished her work history and made misleading claims about her professional background. It has been a persistent problem for President Donald Trump’s administration: an apparent failure to recognise red flags when vetting potential hires and appointees.

The President himself has overstated – often to an absurd degree – everything from his personal wealth to his charitable giving and his own IQ.

And in June 2017, half a year after Chang debuted her cover story, The Post found that Trump had his own fake copies of Time magazine – on display in at least five of his golf clubs.

She inflated her resume, peddled a fake Time cover. And Trump hired her