Bishop and Goodes: the likely outcomes are so wrong

How a GST debate became just the distraction Abbott needed

THE turbulence around Speaker Bronwyn Bishop’s $5000 helicopter flight has exposed some unsettled conditions within the Government and the Liberal Party.

Mrs Bishop and Prime Minister Tony Abbott will today continue to make clear they intend to reject criticisms of the Speaker’s spending patterns — including reports of two more chopper jaunts, $1000-a-day limo rides and a whopping $800,000 expenses bill — and will hope they fade before Parliament’s return in three weeks.

The PM today declared Mrs Bishop was on “probation”, which apparently means she will be in trouble should she take any more $5000 helicopter rides on the taxpayer’s tab.

As a punishment, this doesn’t mean much, except that Mr Abbott won’t push the matter further.

However, the Government already has been damaged by the controversy in ways it will find difficult to overcome, no matter the Speaker’s fate. The affair has exposed sensitive matters.

ABBOTT IS BEHOLDEN TO BRONWYN

The Prime Minister is a prisoner to his debt to the Speaker. Mrs Bishop has looked after Mr Abbott’s best interests at the local level, covering their neighbouring electorates of Mackellar and Warringah. She rules that Liberal domain.

One of his final public events before polling day at the 2013 election which made him Prime Minister was with her. It was a sign of how close they are.

This means Mr Abbott could be blocked between doing what is best for a longtime, loyal colleague and what is good for the Government and the Parliament.

The two have been fierce rivals within the NSW Liberal Party with Mr Hockey heading the moderates and Mrs Bishop prominent within the right faction. They have not been chummy for years.

During the 2009 leadership set-to Mrs Bishop worked as hard to block Mr Hockey as she did to elevate Mr Abbott. So when Mr Hockey agreed in a radio interview the helicopter flight didn’t pass the “sniff test”, it was on again between the Treasurer and the Speaker.

“Joe says some funny things sometimes doesn’t he. I think he said poor people don’t drive cars or something,” Mrs Bishop said on Saturday through a smile that carried no hint of frivolity.

Mrs Bishop is a woman of remarkable resilience who has returned from serious career obstacles, but this might be her last chance to stage a come back.

It must be remembered that when she was a senator she was rated by many commentators as most-likely to become Australia’s first female Prime Minister. However, when the Coalition returned to office she lasted just five years as a minister.

John Howard dropped her as Aged Care Minister in November 2001 and it looked like that was it as far as senior office for her. The rise of Tony Abbott and the Coalition’s 2013 election victory reopened her options.

She wanted a ministry but was made Speaker instead, and tried to expand that job internationally by standing for president of the Inter-Parliamentary Union last October, campaigning on the theme it was time for a female leader.

Mrs Bishop is nowhere near planning a retirement from elected politics, but if she lost the Speaker’s job, her famed comeback ability would be cramped. And she would know this.

THEY NEED HER AS SPEAKER

Mrs Bishop, who has a track record of booting Opposition MPs from the chamber, has helped the Government in some tight parliamentary spots, according to her reading of Standing Orders.

In May last year, one such moment was caught on video. Opposition Leader Bill Shorten was being applauded for his Budget reply speech.

Education Minister Christopher Pyne is seen signalling Mrs Bishop to rise in her chair, forcing the acclaim to stop.

A similar service might not be forthcoming from Father of the House (longest serving MP) Philip Ruddock, or the Nationals Bruce Scott, both possible replacements for Mrs Bishop.

It will be more difficult for the Government to force through financial cuts on others when one of its own members is not bothering to heed austerity priorities.

Tony Abbott’s insistence MPs were doing it tough along with other Australians facing cutbacks looks ridiculous against the itemised accounts of Speaker Bishop.

This could make it harder for the Government to stop benefits to job “shirkers” and those it claims are rorting the welfare system when one of its own appears to be spending excessively.

Social Services Minister Scott Morrison could be the minister most affected by Mrs Bishop’s example.

They ‘deserve’ it – » The Australian Independent Media Network.

It could take a generation to dispel violent extremism from groups such as Islamic State, according to Foreign Minister Julie Bishop.

In a wide-ranging speech, Ms Bishop outlined her concerns about the extent of extremist ideology and the measures Australia is taking to combat it.

“We have no choice but to be part of this struggle against extremism in all its forms — both at home and abroad,” she said.

“This will take years, decades, potentially a generation to resolve.”

Ms Bishop said the growth of groups such as Islamic State, also known as Daesh, “poses a challenge to global security” and that it was “an issue that keeps me awake at night”.

The concern has led Australia to increase funding for security and intelligence agencies and step up its military role in the Middle East.

Ms Bishop also pointed to an expansion on intelligence sharing.

“The saying ‘The enemy of my enemy is my friend” is emerging to be somewhat appropriate in this regard.”

“Our Muslim community — its leaders, its mosques — play an important role in combating extremism,” she said.

“I thank Muslim community leaders for their vital support.”

Her comments stand in contrast to the Prime Minister’s recent remarks about the same issue in a speech on national security.

Tony Abbott was criticised by the Islamic community for saying, “I’ve often heard Western leaders describe Islam as a ‘religion of peace’, I wish more Muslim leaders would say that more often, and mean it”.

More than 200,000 calls have been made to the National Security Hotline in recent times.

Ms Bishop also spoke candidly about the difficulty of prosecuting anyone in relation to the downing of flight MH17 over eastern Ukraine last year.

A report is being prepared into the cause of the crash and Ms Bishop is certain it will show the Malaysia Airlines flight was downed by a surface-to-air missile.

The crash killed all of the nearly 300 people on board, including 27 Australians.

Ms Bishop has suggested it would be hard to pursue Russian-backed rebels if they were found to be the perpetrators.

“I feel sure that whoever ordered that firing, and whoever carried it out, long disappeared into a Russian winter,” she said.

“So it will be very challenging for us to take it any further.”

We’ve known for some time that the Good Ship Abbott was in trouble, and with MPs now seemingly jostling for position could it be a case of man overboard? Paula Matthewson writes.

That sound you hear is the whisper of Liberal Party MPs carefully shuffling around a Prime Minister who’s taken on water and is listing dangerously.

They’re hoping to avoid being dragged down with him into the dark waters of electoral opprobrium and are eyeing those who hope to replace the PM as potential lifeboats.

We’ve known for some time that the Good Ship Abbott was in trouble, partly because it was constructed using shonky policies and shattered expectations, but also because it was steered with the reckless abandon that comes from political hubris mixed with a misguided sense of entitlement.

The summer break provided an opportunity to put the ship in dry dock, replace the defective policies and adjust the political navigation system. At least that was the point of Tony Abbott’s “reset” press conference and the ministry reshuffle conducted late last year.

However, it would appear that no such reset actually took place. Instead Abbott pressed on, continuing to make poor political decisions like the no-media visit to Iraq while bushfires raged in three Australian states, and even worse policy decisions like the unannounced $20 cut to the Medicare rebate.

Now a leak about the Medicare cut from the Cabinet’s expenditure review committee over the weekend suggests hope is fading fast for HMAS Abbott to be successfully refloated, and that the decks are being cleared for a regime change.

Ministers are already jostling to be in the new leadership line-up, and the weekend’s leak flags that Joe Hockey, the one-time heir-apparent but now only the beleaguered Treasurer, wants to be back in contention. It would also appear Hockey is unafraid to tarnish the PM’s reputation while seeking to rehabilitate his own.

According to a newspaper report of the leak, Hockey and then health minister Peter Dutton “opposed the move during a ‘heated’ exchange with the Prime Minister” but the PM insisted on the $20 cut the Medicare rebate for short GP consults, which apparently were “developed by the Prime Minister’s Office and then costed by the Department of Finance and Health”.

This isn’t the first time efforts have been made to shift responsibility for the budget from Hockey to Abbott, particularly by drawing attention to the PM’s insistence on chairing every meeting of the Expenditure Review Committee as it put the budget together.

One well-briefed commentator wrote around that time:

The core problem with the budget is the design, and responsibility for design faults ultimately lands at the feet of the Prime Minister … Abbott used his authority to take charge of the Government’s first budget, yet he seems to be using his political skills to sidestep responsibility, leaving ownership of the document with Hockey.

Since then, the Abbott Government has begun to leak like a scuttled dinghy. Political observers have been treated to a flotilla of leaks to the media, seemingly to position ministers impatient for promotion in the best possible light, or put the case for one ambitious backbencher over another.

It would seem not even the Prime Minister’s Office has been above such shenanigans, appearing to provide leaks to the media at various times to rein in potential leadership contenders such as Foreign Minister Julie Bishop.

Another recent leak, aimed at the Treasurer and suspected to also have come from the Prime Minister’s Office, was described by one press gallery stalwart as exposing the disunity, paranoia and distrust that currently exists at the highest levels of the Government.

This latest leak in Hockey’s favour won’t change the perception of omnishambles, nor will it dissuade voters from booting out the Abbott Government as swiftly as the Rudd-Gillard one if the rot is not soon arrested.

This certainty is what occupies the minds of the shuffling MPs.

The only factor that remains in Abbott’s favour is that there’s no clear front-runner to replace him. Traditionally the leadership team is agreed mostly between NSW and Victorian MPs because combined they have the most votes in the party room. Hockey re-entering the field complicates matters, but at least gives NSW MPs another option other than the invidious choice between the left’s darling, Malcolm Turnbull, and the hard-right’s poster boy, Scott Morrison. Victoria doesn’t have a leadership contender but could supply an able deputy.

And at this point it’s anyone’s guess what deals the Western Australians might do with NSW or Victorian MPs to put Bishop into the top job.

What is clear is that now Abbott has apparently single-handedly botched the “reset”, he’ll likely be deemed unseaworthy and slated for a visit to the ships’ graveyard, perhaps by mid-year.

Meantime we can expect to see a veritable ocean of leaks to the media and other forms of self-promotion as the contenders set their spyglasses on the leadership and set sail for what is guaranteed to be a deceptively perilous journey. 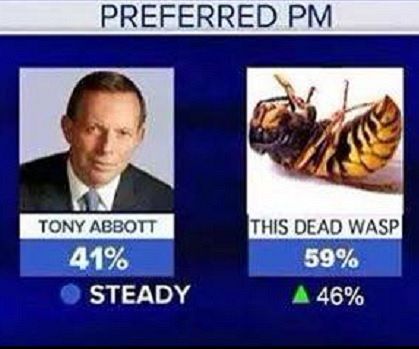 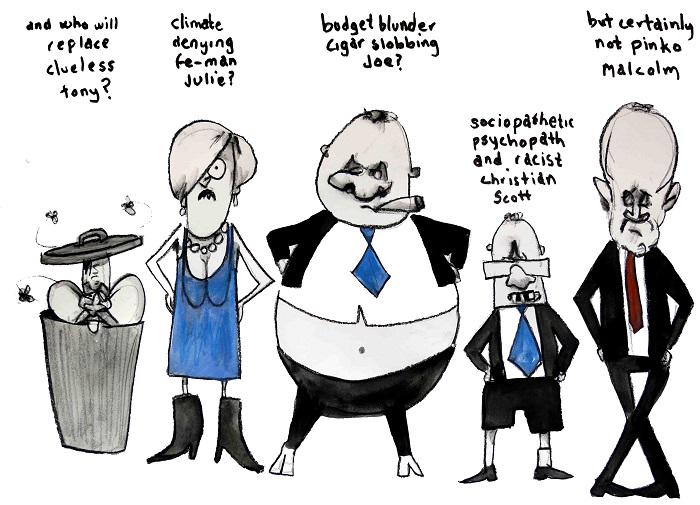 The Liberal Party conundrum: Abbott must stay and go.