During the Trump administration, the running not-so-funny joke was that every week was “Infrastructure Week.” Periodically, like a clockwork designed by M.C. Escher, Trump or one of his flapdoodle minions would pop up and announce that a massive overhaul of the nation’s crumbling roads, bridges, airports, subways and water systems was a mere “two weeks” away.

1 Percent Owes Billions in Unpaid Taxes. IRS Must Reclaim It for Infrastructure. | The Smirking Chimp

The wealthiest 1% of Americans fail to report more than 20% of their income to the IRS, and some of those ultra-rich people use “sophisticated evasion technologies” and criminal tactics to avoid paying their full share, according to a new analysis by researchers at the IRS and economists. The analysis estimated that the top 1% of households fail to report 21% of their income. Nearly a third of that is through sophisticated schemes that random IRS audits fail to detect. The trend is even starker among the top 0.1% of earners, whose unreported income may be twice as high as the IRS estimates. 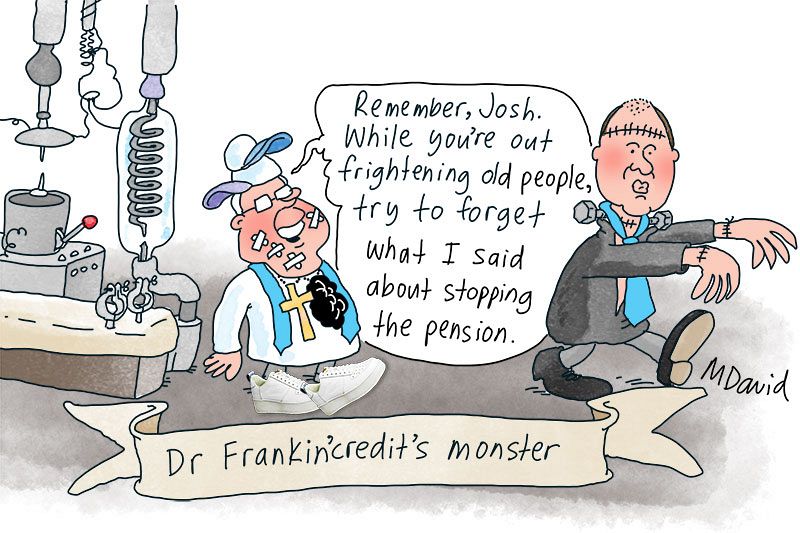 via Franking credits, superannuation and other legal tax ‘rorts’

VANGUARD – For an independent Australia and Socialism

“We have evidence of a massive systematic abuse of the global tax system.

Report singles out tax havens as main cause of global inequality, urges coordinated response to their widespread use

Joe Hockey has been making noise about tax avoidance.

“They’re stealing from us and our community,” he told the Nine Network on Friday, labelling tax cheats as “thieves.”

Tony Abbott told us we should judge the Coalition on their actions rather than their words – sound advice considering their words bear no resemblance to what they actually do – so it would be timely to consider what they have done to address this growing problem.

While other countries are their closing their tax minimisation loopholes, the Abbott government has spent the past year opening them up.

One of Treasurer Joe Hockey’s first acts in office was to roll back Labor’s measures to tackle profit shifting and improving tax transparency – effectively handing back $1.1 billion to big global firms.

As it pushes for a G20 summit agreement this weekend to crack down on corporate tax evasion, the Abbott government has set a timetable for action that is about one year behind the biggest European economies including Britain, France and Germany.

The “early adopters” in the global program will begin exchanging information in September 2017, however, the exchange of information with Australian authorities will not take place until September 2018.

In March this year, the ATO announced an amnesty for offshore tax cheats.  For those who come forward before the end of the calendar year, there is a guarantee of no prosecution and only four years of offshore income is assessed with a maximum shortfall penalty of 10 per cent.

“For lots of people, their forebearers came from war-torn Europe”, tax lawyer Mark Leibler told the ABC’s AM program.  “They wanted to keep nest eggs overseas, not primarily in order to avoid or evade tax, but just as a measure of security.”

So these people and their families have been avoiding tax since they arrived here after the war but let’s not worry about that.

Around $150 million worth of assets is the most declared by one person so far. The money has come from 40 countries including Switzerland, the UK, Hong Kong, Israel and Singapore.

“You’ve got that whole gamut from old money, new money, recent migrants and people sending the money offshore,” he said.

These ‘people’ include our own government.

Australia’s Future Fund has revealed it has invested more than $20 billion through offshore tax shelters, including the Cayman Islands, warning of lower returns if it does not minimise its tax bill.

The $77bn fund for federal public-servant pensions has revealed that 14.4 per cent of its assets, worth about $11bn, are invested in subsidiaries based in the Cayman Islands (a tax haven in the Caribbean) and a further 1.3 per cent is in its subsidiaries in the British Virgin Islands and Jersey.

On top of this, the fund has tipped 12.6 per cent of assets, about $9.6bn, into private market vehicles based in these tax shelters and a small fraction is invested in a vehicle based in Luxembourg.

Answers to a Senate inquiry revealed that, at June 30, the fund held stakes in 15 tobacco manufacturers including a $55.4 million stake in British American Tobacco in Britain, $44.5m in Lorillard and a $44.9m investment in Philip Morris in the US.

Individuals within the government also embrace the benefits of tax “minimisation”.

In July, it was disclosed that Malcolm Turnbull, Australia’s second-richest parliamentarian, has invested in a ”vulture fund” based in the tax haven Cayman Islands.

Mr Turnbull, who has divested himself of shares and switched his investments to managed funds and hedge funds since being elected, updated the register of members’ interests on June 18.

The IPA, not surprisingly, is against any moves to tighten up the laws.

“Inspired by the sensationalist headlines, the emerging policy agenda for a clamp down on tax avoidance should be seen for what it truly is: a ploy by indebted countries, with overgrown public sectors, to hoover up more cash from productive people and enterprises, stifling tax competition in the process.”

You have to give them credit for never letting morality or ethics interfere.  They were no doubt impressed when their much-loved patron, Rupert Murdoch, single-handedly blew an almost billion dollar hole in our budget when the ATO chose not to appeal a court ruling condoning Murdoch’s tax avoidance practices.

In a 1989 meeting, four News Corp Australia executives exchanged cheques and share transfers between local and overseas subsidiaries that moved through several currencies.

Under a legal arrangement when the company was spun off last June, News was forced to pass all of the tax payout to Mr Murdoch’s 21st Century Fox.

News Corp said it had retained $A81 million because it faced income tax charges on the interest payments by the Tax Office. However it seems unlikely to actually pay these funds: News Corp Australia carried another $1.5 billion in tax deductions from a separate paper shuffle that it made when News reincorporated in the US.

The Australian Taxation Office says its $882 million loss to Rupert Murdoch’s News Corporation may just be the tip of the iceberg.

“There are others bigger than this one,” Mr Olesen told a parliamentary hearing in March. “There were significant amounts at stake that we were also unsuccessful with through the courts.”

In a current case, Australian tax authorities allege multinational oil giant Chevron used a series of loans and related party payments worth billions of dollars to slash its tax bill by up to $258 million. The claim is now being heard before the Federal Court of NSW.

Despite growing pressure to crack down on multinationals reaping massive profits in Australia each year and paying little tax, the ATO has been scaling back its technical ability to force the “transnationals” to pay up.

After cuts of $189 million in the May budget, the ATO announced that they had to cut staff by 2,100 people by the end of October.

Community and Public Sector Union (CPSU) deputy national president Alistair Waters said “The tax office has provided evidence to the Senate that for every $1 spent on resources by the tax office, that collects $6 in tax revenue.  Obviously if you are pulling resources out of the tax office that makes it easier for people who might want to avoid paying their tax.”

Public servants with hundreds of years of combined technical know-how have left the ATO’s “Internationals’ Group” in recent years, with the process accelerated by the present massive cuts to the agency.

Private advisors hired by “transnationals” to minimise their tax payments know too much about internal workings of the ATO and are using their insider knowledge to profit their clients.

Case deadlines of 90 days imposed on audit teams by ATO bosses eager to increase the number of cases covered have allowed transnationals to simply “wait out” the Taxation Office or to have low-ball settlements accepted.

Swedish furniture giant IKEA paid just $7.7 million in tax in Australia in 2013-2014, despite banking an operating profit of $92 million for its Australian activities that year.

Even the government’s domestic decisions belie their stated willingness to crack down on tax rorting.

Repealing the legislation regarding novated car leases and FBT cost us $1.8 billion in revenue and the only people to benefit are those who fraudulently claim business usage of their car, and the salary-packaging industry that has sprung up to service this perk.

But what can you expect from a Prime Minister who keeps caucus waiting for an hour – his excuse being “he had to schedule an early morning visit to a cancer research centre in Melbourne on Tuesday so that he could justify billing taxpayers to be in the city for a “private function” the night before”.

Or a Treasurer who defended “his practice of claiming a $270-a-night taxpayer-funded travelling allowance to stay in a Canberra house majority-owned by his wife” as did the Communications Minister who “rented a house from his wife Lucy when in Canberra.”

In Canberra, MPs are not required to show a receipt to prove they stayed in a hotel because the blanket $270 rate applies whether you stay in a hotel or a house owned by yourself or another person.

Because of the rules, many MPs purchase property in Canberra to provide a base during parliamentary sittings and use their travel allowance to pay off their mortgage.

We also have our Prime Minister, Attorney-General, Foreign Minister and Agriculture Minister defending their practice to claim travel and accommodation costs to attend weddings whilst grudgingly refunding the money only after it was exposed in the press.  Attendance at sporting events apparently still constitutes official business.

Tony Abbott had promised to lead an honest government that would respect taxpayers’ money and end the age of entitlement.

Joe Hockey has “vowed to give the Tax Office whatever laws it needs” and is “determined to use all available resources to close tax loopholes.”

Sorry boys – your actions make me doubt your sincerity.