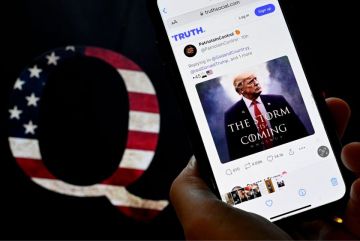 Lets’ not forget that Scott Morrison’s “besties” were QAnon, and he modelled himself on Trump and a media ratings chase. While secrecy was his hidden weapon of choice. Denial of everything factual was fake news to such an extent that he became unbelievable.

Many liberal commentaries are viewing Trump’s recent active embrace of QAnon as the ploy of a man who is trying to increase his following and cling to relevance in the face of unfavorable polls (a one and a half year low of a 34 percent approval rating) and a barrage of legal threats. At the same time, no one should underestimate the potential for Trump-spawned QAnon violence. The Atlantic’s Kayyem finds a possible grain of hope: “I don’t know how the decay of our democracy ends. And I do not want to minimize the danger inherent in Trump’s adoption of QAnon. Yet his decision is encouraging in at least one way: By throwing in his lot with a bizarre cult, he is also inadvertently showing the limits of his appeal.”

Source: TRUMPAnon: Is Trump’s Embrace of QAnon the ‘Last Act of a Desperate Man’? | The Smirking Chimp