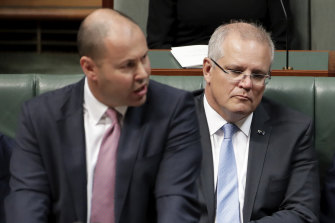 They are all about to benefit from stage 3 tax cuts the rest of will be left to watch.

It was pointed out, too, that politicians’ salaries have not suffered from the near-decade of wage stagnation that has afflicted the rest of us. Their pay has gone up 30 per cent over the past 10 years. The annual base rate for a backbencher is now $211,250 (ministers and shadows get more), and the prime minister’s salary is $550,000.

Morrison, his media backers and the business lobby were horrified at the thought that the wages of the poorest workers should meet inflation – which is to say, workers should not take a pay cut.

“Morrison supports decline in living standards” should have been the headline

Source: Politicians’ pay has gone up by a third in a decade, but a wage rise in line with inflation is too much?