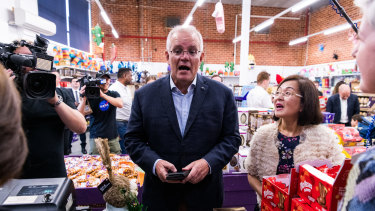 Prime Minister Scott Morrison has chastised Labor for an ad highlighting Liberal MP Gladys Liu’s links to donors suspected to be risks to Australia’s national security, claiming the opposition is engaging in racist campaigning. “They go after Gladys Liu because she’s Chinese,” Morrison said on Sunday. “They’re engaged in what I think is a sewer tactic here. This is Morrison Wolf whistling and the The Age assisting with it’s banner

The Sunday Age revealed a new online ad targeting the Hong Kong-born MP’s record, including her involvement in a campaign against the LGBTQ Safe Schools program and her campaign’s use of controversial signage that appeared to mimic the Australian Electoral Commission.

One component of the ad stated that the Victorian division of the Liberal Party reportedly handed back $300,000 in donations because then prime minister Malcolm Turnbull’s office was told the Chinese donors, invited to a 2015 event by Liu, were potential national security threats.

“What do we know about Liberal Gladys Liu?” a male voice says in the ad, with an ominous-sounding background track.