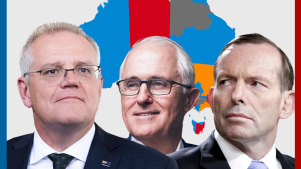 It’s no longer “what can we do for you, but what you can do for us in terms of $$$? In the end many of these announced promises will simply go the way of vanashing bubbles even if the LNP government wins. Morrison has been only doing one thing for the past 3 years,and that’s rehearsing the reselling of his massively expensive waste. It’s like a replay of Sunset Boulevarde “Action Lights your on Scotty” with not a voter invited on to his very “on set party” for the crew.

The system under which billions of dollars of grants are handed out to communities across Australia is irretrievably broken. There’s no other conclusion to be drawn from the figures compiled by The Sydney Morning Herald and The Age that, grant by grant, electorate by electorate, show a community’s ranking on the electoral pendulum dictates its financial support.