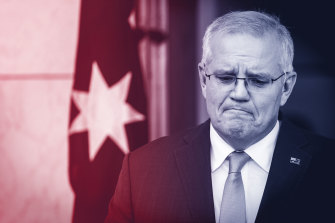 Voters have deserted the federal government in large numbers since the last election in powerful swings that could sweep the Coalition from at least 14 seats including parts of Queensland and Western Australia where it once thought it was safe. The findings highlight the challenge for Prime Minister Scott Morrison in winning Australians back to his cause when he starts the campaign with a Coalition primary vote of 34 per cent nationwide, down from 41 per cent at the last election.