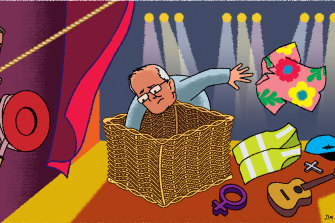 He’s dragged us down, down down on Climate, Aged Care, Diplomacy, Asylum Seekers, Refugees, Women. Let alone, pensions, wages,  our history, Robodebt, NBN, Racism, need I go on?. The fact is at Easter even strongest practitioners of Christianity today aren’t Morrison White, definitely not Nationalists, assimilationists, or one-eyed historians. They are indigenous, colored, ethnic, multicultural and are a far more welcoming mob than Morrison’s. It’s why Morrison doesn’t dare walk the streets or enter pubs but prefers the narrow lens of his edited media controlled cameras.

It’s time for Anthony Albanese to get some credit. The Prime Minister is calling the election and Albanese is exactly where he planned to be. Ahead. Under years of intense pressure to find some inner mongrel, to get more aggressive, Albanese stayed calm and carried on with his plan.

Source: For Albanese to succeed the PM had to fail: Scott Morrison did not disappoint