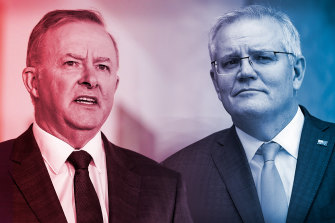 These myths are so ingrained it’s unbelievable. Yet the MSM continue to reinforce them despite the facts. The most progessive Governments this country has seen were the Whitlam’s and Hawke’s ALP. Yet. Peter Costello’s and Murdoch’s media mainstreams still turns on the mythical and fake love affair advertising the economic management skills of the LNP. The LNP has taken us to wars that made us no money. They have taxed us more than the ALP ever have and lead us to the greatest state of chaos we have ever experienced since the Great Depression. Wake up Australia, the LNP has seen us slide on every economic and social metric since 2013 when we were No 1 in the world. That’s a fact, no matter the propaganda or what you think.

Anthony Albanese has increased his lead against Scott Morrison on keeping the cost of living low but Labor is still behind on other major election issues.

Source: Election 2022: Albanese ahead on cost of living, but voters back Morrison on economy