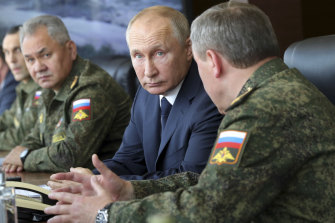 If true, the deaths of so many generals, alongside more senior Russian army and naval commanders – in just four weeks of combat – exceeds the attrition rate seen in the worst months of fighting in the bloody nine-year war fought by Russia in Chechnya, as well as Russian and Soviet-era campaigns in Afghanistan, Georgia and Syria.

Source: Russian generals are getting killed at an extraordinary rate