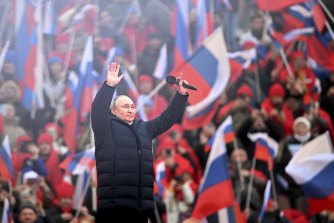 Putin does exactly what Hitler did and the world watches as he claimsit for the greater motherland. However, it looks more like a confected Nth Korean rally no opposition or equivalent allowed at the point of is  guns. All Style and suppressed meaning.

Vladimir Putin appeared at a huge flag-waving rally at a packed Moscow stadium and lavished praise on his troops fighting in Ukraine, three weeks into the invasion that has led to heavier-than-expected Russian losses on the battlefield and increasingly authoritarian rule at home.