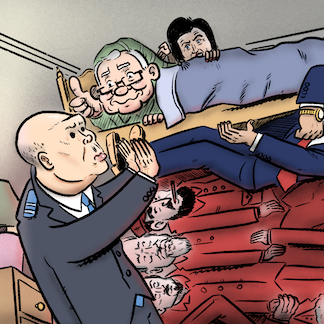 The Reds are back. Scott Morrison’s Liberal-National government has recently launched an offensive of “red-baiting”, a practice long thought consigned to the history books, in preparation for an anticipated May 2022 election. Last November, Defence Minister Peter Dutton hounded Shadow Foreign Affairs Minister Penny Wong, charging her with “not standing up for [Australian] values” in comments on the China-Taiwan dispute. This week, News Corp has targeted Opposition Leader Anthony Albanese after the Chinese Global Times offered him some backhanded compliments. A video also emerged of Albanese speaking Mandarin at an economic summit, and he was found to have participated in a forum for Tribune, newspaper of the defunct Communist Party of Australia. (This interview, it should be noted, was 31 years ago.) Such claims have long plagued the progressive side of politics. Since the first news of the Bolshevik victory in the 1917 Russian Revolution reached our shores, fears of Australia following Vladimir Lenin’s lead have been used and abused by conservative politicians for electoral gain. But, how successful have these “moral panics” been? And do they still pass muster with today’s electorate?

Source: Still under the bed? Red-baiting’s long history in Australian politics – and why it’s unlikely to succeed now