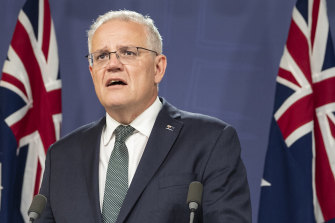 1% of the global sanctioning of Russia by Australia is a flea on an elephant’s back. The bellowing roar is however is for Morrison’s political sake folks. Our 1% only as a global emitter of CO2 was his excuse for doing nothing about being one of the biggest exporters of carbon. He wanted to be as quiet as a church mouse. That again has been for his donors interests and his domestic political sake. His even bigger silence at present is not to sanction but to reward Rupert Murdoch whose media org Fox is the biggest Putin lover and Russian propagandist in America and that silence is also for Morrison’s own political sake. Because as I write he’s dishing out a share of his current advertising war-chest of $680M on News Corp, Foxtel and Sky News. The Putin lover Murdoch’s are in fact the LNP’s media voice in Australia and he has the gall to call Albo “a Red under the bed”!

As Russia’s attack on Ukraine unfolds dramatically, Australia is in the choir stalls, not centre stage, when it comes to the West’s response. But Scott Morrison is determined its voice be loud. His denunciation of the Russian “thugs” and “bullies” has been cast in the most forceful language. After announcing sanctions on Wednesday, he assured Ukrainian Prime Minister Denys Shmyhal that Australia, working with its partners, was prepared to do more.

Source: Russia-Ukraine: How Scott Morrison will use crisis to shape 2022 federal election outcome