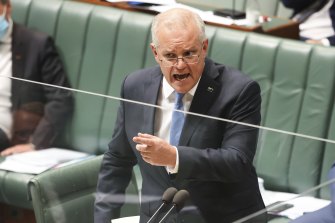 While the streets are running amok with a right-brigade protest no Left or “Commies ” are  in sight. Morrison is dredging up the old LNP political cherry that the Reds are coming to get us. It goes to show just how desperate and a ridiculous political thinkers they are. Nobody is buying that Scamo is the nice daggy dad from Cronulla anymore. Promotional photos no longer cut it and have made him look the poor mad man he is.

Buying subs and tanks go to show the LNP is keeping the Industrial Military complex happy along with mining because while yelling “China is coming” they selling coal to them. Morrisson has wanted to go down this fear-mongering path since 2005 and the Cronulla riots. Fixating on the Lebanese, who happened to be Christians, was his desired political tactic and not Reds under beds. Abbott did it with  the Russians and ignored the Chinese. Morrison and Dutton have decided on the Chinese and  they are going to save us with 121 new tanks and AUKUS. Have those tanks even been delivered? Has AUKUS been deployed? They have our biggest and best naval vessel break down in Tonga and it has taken a week to deploy 129 ADF of 1700 promised to aged-care.

There is currently only one political party stable, rational, steady and democratic enough to be employed to to govern and “It’s Time Again”

Not since Robert Menzies used his “reds under the bed” anti-communist campaign in the 1950s has an Australian Prime Minister been so determined to paint an Opposition Leader as a quisling for a perceived enemy. It is now clear that is precisely what Scott Morrison and his colleagues, floundering in the polls, are up to as the federal election draws near.