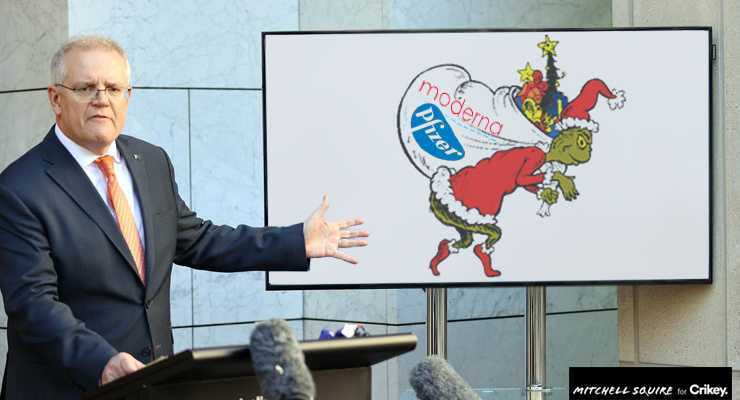 As a result of yet another “Beulla peal me a grape ” announcement by Morrison, the States are having to mandate another strict program of protections like mask-wearing because all Morrison brings to the table is square dance-callers series of announcements. Which of course Morrison claims is sensible but rather a “personal responsibility” like Sunscreen and not necessarily enforced.

Albo sensibly reminds us that if you don’t put on Sunscreen your children and their friends freinds friends won’t catch your sunburn. Morrison, you’re the stand out example of Australia’s biggest KLUTZ.

Now Morrison wants the states to again step up and open up vaccination hubs to shoulder the burden of a booster program that suddenly looks as much of a race as the initial vaccination effort. Or as his apologists at The Australian put it, he’s “putting the heat on” the states. Meantime, GPs are complaining of a lack of funding and supply to meet the demand purely for those who are deemed eligible for one — which under the federal government’s rules is still only a minority of the population. There are “plenty of doses in the fridge”, Morrison says, but apparently insufficient funding to make it worthwhile for GPs to run vaccinations at scale. It’s early yet, but it looks increasingly like Morrison has again planned a Commonwealth rollout, it has again gone wrong, and he’s again demanding the states and territories save him. What will the price be this time?

Source: It’s beginning to look a lot like strollout