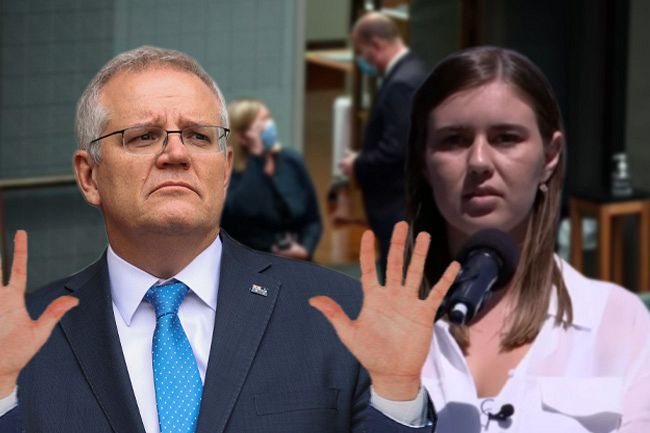 OLD DOG, OLD TRICKS, GRABS CENTER STAGE, TO SELF PRAISE AFTER HAVING PLUNGED THE GOVERNMENT INTO PUBLIC DISREPUTE LIKE NO OTHER. CAPTAIN BUNJEE.

Morrison’s media claim is that “he’s the fastest gun in the West” when it comes to “recoveries”. The fastest ever “economic recovery”, the fastest “to change parliamentary culture”, the fastest “freedom providing” government. The fatsest to react to what we need. Of course he is, and nobody would deny that. When you hit the end of the bunjee the only way is up, and for a short moment it’s what seems a fast recovery but it’s not. For every action there’s an equal and opposite reaction. That’s Newton’s Law. But inevitably that’s not the best but only blinkered explanation of what’s going on. Einstein’s Relativity provides a much broader context and clearer view. In Morrison’s do-nothing world it’s often the worst. It’s why ScaMo grabs center stage and the mike to control the narrative and whatever positve outcomes others achieve as his initiative.

Basically, it’s just another opportunistic photoshoot with a bullhorn applied domestically, blinkered, linearly and never globally comparative. The ALP has had gender equality policies as their priority for over 40 years and brought women in to battle with what is essentially LNP culture and not “parliamentary culture”. They brought in quotas and still today Morrison’s autocratic LNP capture of what happens in parliament remains. He’s going to investigate Tudge no independant third party is. The system will remain untouched.

As Australian of the Year and sexual abuse survivor Grace Tame put it: ‘Parliament’s ecosystem of abuse has been revealed … 15 minutes after the 500-page Review launched today, Scott was already claiming it’s a safer workplace than when Brittany was there. This, days after he coercively orchestrated the ambush of Bridget Archer.’ If indeed there have been any improvements in the workplace culture since the Brittany Higgins allegations first surfaced in February, they have happened in spite of this Prime Minister.