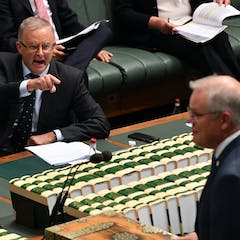 As we head into a federal election campaign next year, the focus on whether government – and which party – can be trusted to govern openly and honestly for the public good is looming larger than at any time in living memory. Plans to overhaul Commonwealth whistleblower protection laws were revealed last week by Assistant Attorney-General Amanda Stoker. The Coalition government’s legislation for a federal integrity commission (or ICAC) is also imminent, following feedback on the extensive problems with its draft bill last year. And a plethora of other accountability issues are awaiting action. Join 175,000 people who subscribe to free evidence-based news. All these provide a reminder, heading into the election, that trust in government hinges not only on “performance” in a direct, hip-pocket sense. It also depends on who can be trusted to protect public decision-making from becoming a self-serving gravy train for leaders and their friends.

Source: With a federal election looming, is there new hope for leadership on integrity and transparency?