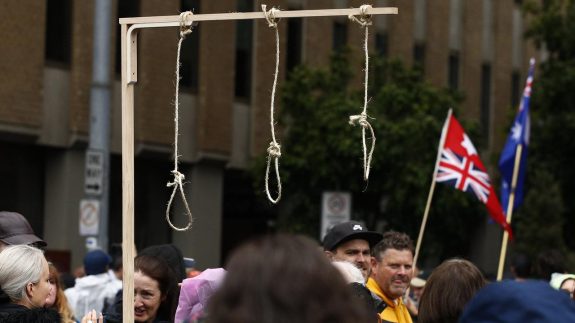 These are LNP symbols seen throughout history. It’s Right-Wing Pride on show backed by LNP MPs

It is shocking but sadly not surprising that Scott Morrison apparently supports death threats against a Labor Premier. The standard you walk past. But what is most profoundly shocking is that there has been no condemnation from the ALP of these threats against one of their own. So can we assume if someone drives a mock gallows with an effigy of Morrison hanging from a noose through the streets of Canberra, there will be no repercussions? Or perhaps Peter Dutton? Anyone can do now this with impunity, we assume? Any group can gather around Parliament House shouting “Kill Scott Morrison, hang Peter Dutton” and there will be no repercussions? Because this is where we are at now in Australia. Because these are our values. And the fish rots from the head. Note: Late this morning after 3 days of intense social media pressure, commentary by the msm and some politicians has started to appear.

Source: Gallows in the streets of Melbourne – » The Australian Independent Media Network