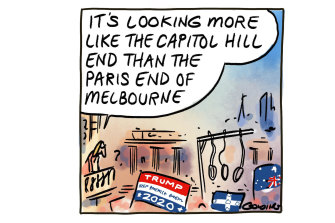 The media might it’s a joke. A product to sell globally Murdoch inc certainly does and it uses it to boost right-wing support. LNP politicians joining a crowd yelling Kill Bill aren’t ANTIFA nor could be called a falselag. The mob are an organized core of right-wing potentially dangerous domestic terrorists. The numbers of demonstrators may be inflated by a mix of genuine protestors but that mob was nevertheless a very organized one performing for International attention and cameras. This wan’t a demonstration against oppression Vietnam or South African Apartheid. It wasn’t and demand for better working conditions, asylum seekers or Indigenous rights. It was the promotion and celebration of Jan 6th in the US and an organized not spontaneous demonstration against Democracy which unlike America’s is still trusted here. Because Bill has the support of 60% of Victoria’s voters.

Several state Liberal MPs have encouraged a large and sometimes angry group of protesters gathered on the steps of Parliament House, some of whom had earlier chanted violent slogans around a full-sized gallows and called for people to “dance on the end of a rope”.