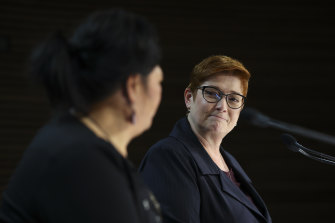 Believe it or not from the mouth of this “do-nothing” “we have a plan”government comes the chest beating challenge to the US and China “action is louder than words” na nana nana na!! The arrogance that shames all Australians is something exceptional. This Australian Government has shown it’s stripes and shamed us they have joined the Russians and Saudis as a counter pledge in this existential game of climate chess. While proudly crying “we don’t need to have the planet’s best interests at heart” “That’s the Australian ( MAGA ) Way”

Foreign Minister Marise Payne says she welcomes a climate agreement between the United States and China but it needs to be translated into action, conceding there are still many differences between the world’s two largest emitters.