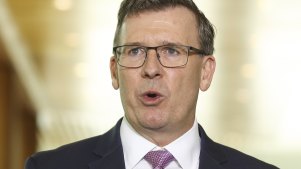 Unlike Tim Smith Alan Tudge survived his car crash moment simply by refusing to go. Is it any wonder he supported Smith to stay because it once again reminded us just how self serving a prick he was. A man with little class morals or manners Tudge was appointed as Minister for Education by Morrison.

Tudge now also believes in greater Voter ID just as he believes history shows there are people out there in his electorate who want to “steal” his position.

History recognises distinctions between fact and fallacy. Tudge tells us he wants history teaching that “recognises our democracy is based on our Christian and Western origins, with a reference to the importance of the values of patriotism and freedom”. Any well-educated history student would know that in the first part he is simply wrong. The origins of democracy lie in classical and pagan Greece, not Christianity or the West, both later inventions. In the second part, he offers his opinions and, as he says, his values, but not historical understanding.

Source: Correction, Minister: democracy’s roots are neither Christian nor Western