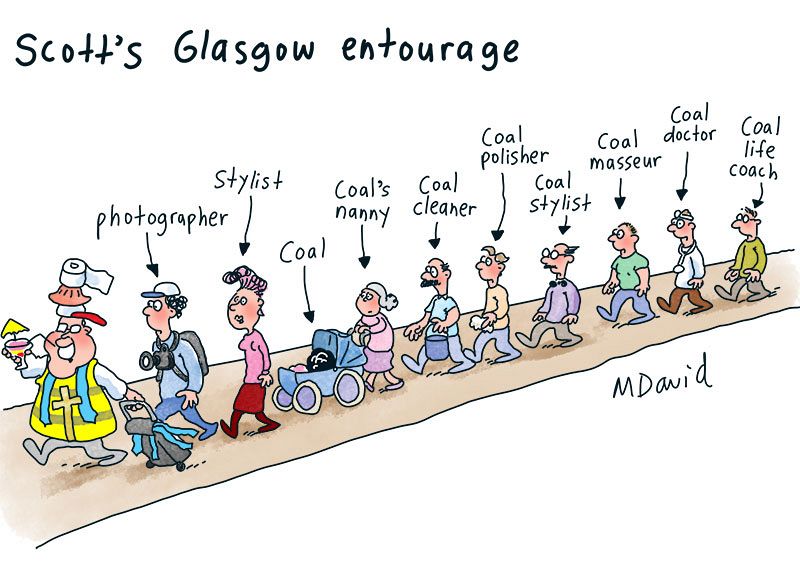 Science has been cutback, 40,000 academics have lost their jobs. Yet, a free $40bn was handed to business via JobKeeper to save jobs. We have opened up and business is begging for workers workers Morrison claims to have saved. He simply gave money to businesses who simply”thought they might need it” and not directly to workers. Remember JobMaker that was a great Morrison Plan the plan to create 200,000 jobs. Millions were handed out to create 5,000. Now that was a Plan.

Now that caravan of Morrison wisdom, is heading to Glasgow and being called the “bumbling morons” by the likes of the NYT and the global media. With leaflet in hand these punk comics are off to present another Morrison Plan stolen from Frank Trump Sinatra. Morrison singing “We are going to do it the Australian Way” He has a Plan that’s not really a Plan but only a shitload of hope and that his bucket of hope isn’t recognized for what it really is. Yes, hope that someone else on the planet will provide the technology, the alchemy, that will solve the world’s problem. Not now, or tomorrow, but sometime down that 3 decade track and it’s hopefully too late for  Morrison’s “Do-Nothing Miracle” to be remembered. The man with a Plan hasn’t even provided a first step to action that Plan. How often have we seen him bang the drum of nothing before? Morrison creates more wind than a nation of cow farts, more noise than Clive Palmer and offers nothing in the way of  Australian cooperation with the rest of the world. Morrison has stolen MAGA from Trump and substituted Australia. Meanwhile even America has joined the rest of the world leaving us the stand alone lagard nation.

The Morrison Government is fobbing us off with a tissue of lies, a wink, a nudge and a glossy pamphlet, writes managing editor Michelle Pini.