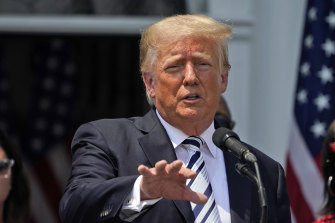 It’s got Trump’s Brand on it but offers nothing promises everything and protects Trump from any liability. Trump’s credits of Atlantic City Casinos and other failed brands are left off the prospectus. It must be remembered he too $82 mill out of Atlantic C which like Nero he left burning for decades after along with a trail of human destruction. Another Wolf on Wall St boiler room scam.

Nine months after being expelled from Twitter and Facebook for his role in inciting the January 6 Capitol insurrection, former president Donald Trump has announced he’s launching a new media company with its own social media platform.