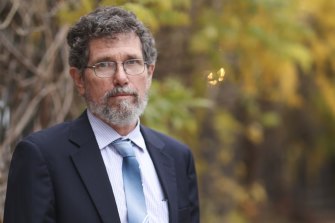 Days after the PM and the Deputy PM declared Facebook and social media sites will be forced to limit Free Speech the sitting idiot Minister in charge of Education Alan Tudge declares Universities need to be forced to open it up. The Morrison government is certainly not a team that seems to know what it’s doing. They seem more like the Three Stooges.

Peter Ridd was politically financed and supported at great cost to have his dismissal overturned and he failed. Now the government wants to overthrow the Court’s rulings by changing the law because it offends Tudge. There is something very Trumpster about Tudge’s wants, actions, and personal history and it’s not representative of a Democracy that’s for certain.

Universities face the prospect of further rules to protect academics’ free speech after Education Minister Alan Tudge raised concerns about a High Court decision upholding the sacking of marine physicist and climate change sceptic Peter Ridd by James Cook University. The decision ends Dr Ridd’s four-year legal battle with JCU after he was censured and ultimately sacked for challenging his colleagues’ views on climate change and the Great Barrier Reef, along with the university’s attempts to discipline him.