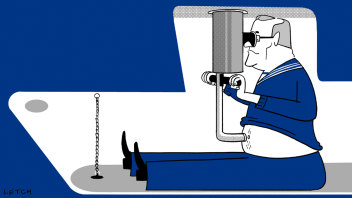 How is it Scott Morrison sacked by both the NZ and Australian Governments for shady tourist deals was allowed to bring that dept hand to a job with the LNP and become PM? In one foul swoop, Morrison has managed to fuck over France, even piss off his bestie ally America, upset the Indonesians, and stand naked with no contract in hand in front of us and the world,hoping the media will save him. He’s the magician whose performance never really works yet leaves everyone flabbergasted mouths agape by his ineptitude.

Watch this space, though, because Biden and Macron could conceivably come to an arrangement to share the Indo-Pacific marketplace, with the French supplying a small number of subs to Australia, after all. Remember that in Morrison’s rush to announcement last week he actually left Australia without a contract. The AUKUS deal still has 12 to 18 months of haggling and review ahead of it before it is signed.

Source: His sights on domestic navel-gazing, Morrison’s all at sea on the world stage