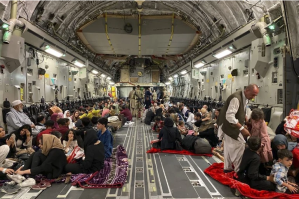 The US has evacuated 9000 in 6 days. Morrison has managed 160. American evacuees seem to be making it to the airport in large numbers Morrison claims nobody is able to make it to the airport because the Taliban is preventing them. The numbers suggest somebody is lying and it’s not the those reporting on the American numbers.

The United States has evacuated about 3,000 more people from Afghanistan’s Kabul airport, according to a White House official, bringing the US evacuations tally to about 9,000 since August 14. Meanwhile, a United Nations threat assessment report says Taliban fighters are conducting “targeted door-to-door visits” of people who worked with the US and NATO forces, increasing the fear of revenge.