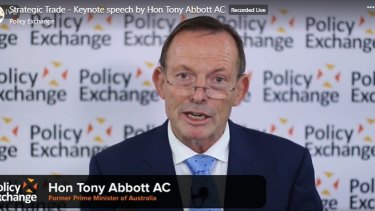 The lie continues. Abbott didn’t set up a “Trade Deal” with China  the ALP did well before Abbott came along, stole it. Our relationship with China today would be significantly better than it currently is under the LNP. Mind you, Tony Abbott was a role model and precursor for Trump teaching him how to run a democracy into the ground with a nope nope nope strategy and which the GOP still employ today. Abbott however, was a backroom Liberal Party puppet whereas Trump stole the Republican Party and leads it today.

Former Prime Minister Tony Abbott has told a British audience that there is no way he would sign a trade deal with China today.