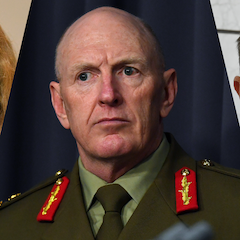 Malcolm Turnbull is a professional critic of the government but his assessment of the rollout is widely shared. “I can’t think of a bigger black-and-white failure of public administration than this” he told the ABC. “The reason we are so far behind is because the government last year didn’t buy enough vaccines, they didn’t buy nearly enough Pfizer and they didn’t buy any Moderna.[…] It is a comprehensive failure of administration […] you can’t put a gloss on it.” Morrison goes into Friday’s national cabinet with some states demanding a lowering of arrival caps and complaints about Pfizer shortages. There’s deep irritation about the shambles flowing from his AstraZeneca remarks. Meanwhile nearly half the country has been in lockdown. The default position of the PM – who lay low all week after Monday night’s appearance – is gloss. But it will be hard for him to apply any shine that doesn’t immediately rub off.

Source: Grattan on Friday: The pandemic is now putting the ‘experts’ in their own world of pain