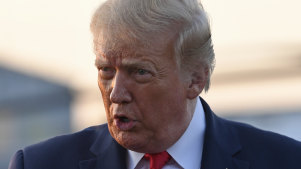 Last October, Brennan announced her plans to retire. She was replaced in June by Louis DeJoy, a businessman and Trump loyalist recruited by Treasury Secretary Steven Mnuchin.

He became become a lightning rod this past week amid reports of mail-sorting machines being removed from postal facilities and blue collection boxes uprooted from neighbourhoods across the country.

via Tracing Trump’s unprecedented war on the US Postal Service