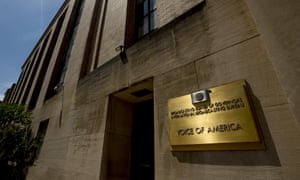 Seven senior officials had their security clearances withdrawn this week, making it impossible for them to continue in their roles. They included the chief financial officer and former interim CEO, Grant Turner, and the agency’s general counsel, David Kligerman, who both said they had been fired for their resistance to the politicisation of the organisation under its new chief executive, Michael Pack, a Trump supporter and ally of rightwing ideologue, Steve Bannon.