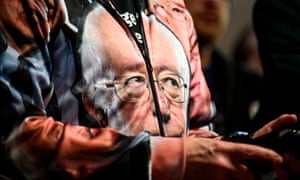 The Vermont senator is now the first choice of 25% of voters, the New York Times/Siena College survey found, an increase of six points from a similar poll taken in October.

A drop in popularity of Elizabeth Warren, the Massachusetts senator, from 22% to 15% accounts for Sanders’ boosted standing, with Pete Buttigieg, the former mayor of South Bend, Indiana, and former vice-president Joe Biden stagnant in second and third place respectively with 18 and 17%.

Sanders, 78, has been “consolidating support from liberals and benefiting from divisions among more moderate presidential candidates who are clustered behind him”, the New York Times article accompanying the poll data claimed.