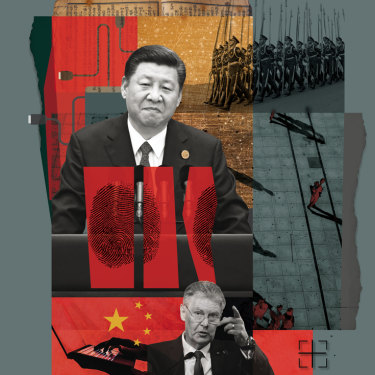 The word “aggression” seems so out of place here when you consider the ADF is present in Afghanistan, Iraq,and Syria and China has only 1 overseas deployment. Throughout our history we have been more suspicious of China than China has been of us. While we are ever increasing the “Blanket of  National Security” over our own citizens China has been loosening it over theirs. If we wish to go on an overseas junket we used to prepare ourselves for running into brash Americans, or groups of Russians today it’s the Chinese so much so we prefer to go off season because there is a tsunami of Chinese tourists everywhere.

It strikes us that our AFP, ASIO, Security Services along with think tanks and other advisors are short of work or there just too many, They have gone off warning us to the threat of  Muslims and Africans terrorising the country and with little or nothing to do have now focused on the Chinese. But currently with an ever increasing public intensity since the LNP took over the government and Peter Dutton became head of the mega-bumbling Homeland Department particularly now with the coming of Morrison. Abbott was named the Pivot of the Pacific in the eyes of the Americans but oops, he wanted to be a part of NATO. He gave away Radio Australia the heart beat of the region for 75 years in places like Vanuatu. He more than anyone opened the doors to China without the current atmosphere of suspicion and that wasn’t so long ago. He cut Foreign Aid allowing the Chinese to help develop the region. The Pivot was seen as the Pillock who created the vacuum. While Tasmania begs the Federal Government for money to run 62% of it’s economy whose there to help the Chinese boogie man in whose eyes the LNPs

The Americans seemed to have whispered in somebody’s ear and the whole nature of friendship changed and we are back to the old paranoia that two wongs don’t make a white. That’s LNP diplomacy ASIO and the AFP are in the forefront again and the National surveillance a necessity and secrecy a must… Blame the Chinese. (ODT)

How China and the CCP aggressively push beyond their borders