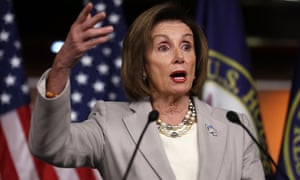 Another UNPRECEDENTED move by  Trump ODT)

Top Democrats reacted with anger to Donald Trump’s decision to go ahead with the Abu Bakr al-Baghdadi raid without giving them advance notice, on grounds that they were not to be trusted with such highly sensitive information.

In a break with precedent, Trump excluded senior Democrats on the so-called Gang of Eight – the group of congressional leaders who by law are to be informed of covert actions ordered by the US president – from all operational intelligence.

Those cut out of the loop included Nancy Pelosi, the speaker of the House, Senate minority leader Chuck Schumer, and Adam Schiff, who chairs the House intelligence committee.