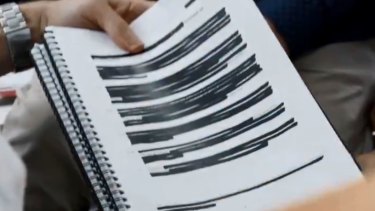 Michaela Cash started it and then his behind the White Board. The problem is Privatised Media fails to deliver or even begin to sell this product. Tha ABC is the only media organisation constantly under attack (ODT)

With a media blitz running for weeks, the campaign is unusual in its scale as well as its broad support across the industry from Nine, the ABC, The Guardian, News Corp Australia, Prime Media, Seven West Media, Sky News, SBS, Ten, the WIN Network and others. (Nine owns this masthead.)

Your Right to Know: Australian media’s campaign for the right to know fights the darkness