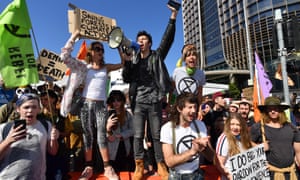 On Monday, the activist group Extinction Rebellion will begin a week of global protests.

In Brisbane, home to the grassroots organisation’s first Australian chapter, activists are preparing to stage protests around the city. At the group’s headquarters in Woolloongabba, a busy training schedule is under way. It is hosting introductory sessions at local libraries planning two large-scale marches, with a litany of other “non-violent disruptive actions”.

Since the group conducted its first action in Australia in April, there have been more than 170 arrests, with penalties ranging from a warning to a $1,500 fine.