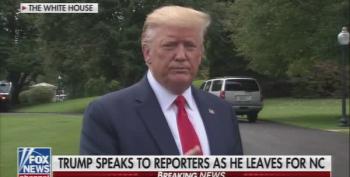 During a Monday press spray with the annoying chopper behind him, Trump belittled the victims of Hurricane Dorian (and the Bahamas in general) and claimed that many gang members and drug dealers were trying to get into the country along with the survivors.

America has a long-standing tradition of allowing survivors of natural disasters to enter the US, but The NY Times reported that evacuees were treated horribly, “The confusion over who could come was highlighted over the weekend when 119 people from the Bahamas were ordered to get off a ferry bound for Florida because they did not have the necessary United States travel visas.”

Off-camera, a reporter asked how the United States is handling this precarious situation and instead of extending the hand of warmth and hopefulness, Trump smeared the people of the Bahamas in his usual vicious fashion.