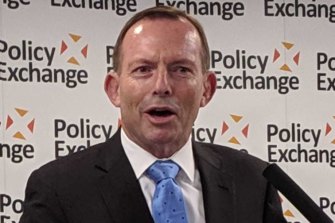 He has the cunning of a sewer rat and the IQ of a Boris both flashes in Tory history who dream of 72 virgins,,,Murdochian Trumpsters (ODT)

Boris Johnson is poised to win any snap poll because he is on the side of the people, former Prime Minister Tony Abbott has told an audience in London.

Abbott, who was dumped by his own colleagues as prime minister and by the voters in the historically blue-ribbon seat of Warringah in the May election, is delivering a series of speeches in Europe.