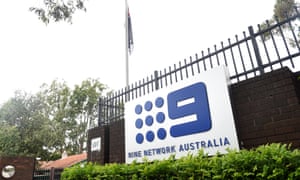 Nine Entertainment used its historic TV studios in the Sydney suburb of Willoughby to host a $10,000-a-head corporate fundraiser for the Liberal party on Monday night.

Since the merger with Fairfax Media last year, Nine has had control of the Sydney Morning Herald, the Age and the Australian Financial Review, mastheads which have always prided themselves on independent journalism.
Government sent ‘chilling’ letter to Channel Nine over One Nation strip club broadcast
Read more

That independence was still evident as the venue for the Liberal party fundraiser was revealed by the AFR’s gossip columnist Joe Aston.

Nine is emerging as a local rival to News Corp Australia after making a $113.94m offer to acquire the remaining shares in Macquarie Media, which owns 2GB.

The networking event was organised by the Liberal party’s fundraising arm, the Australian Business Network, which asked Nine to host the dinner at Willoughby and carry the cost of the catering.

via Nine Entertainment hosts $10,000 a head fundraiser for Liberal party | Media | The Guardian