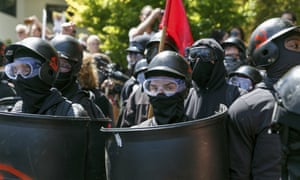 In promoting the rally on social media, Biggs has brandished a Trump-themed baseball bat, appeared in videos wearing a T-shirt bearing the slogan “Training to Throw Communists Out of Helicopters” – a reference to the Chilean Pinochet regime’s methods for executing dissidents – and has taunted antifascists, saying “You’re not gonna feel safe when you go out in public” and “I’m gonna stomp your ass into the ground, Antifa”.