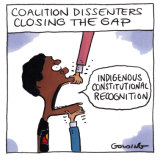 Prime Minister Scott Morrison’s office has relayed the message to colleagues after an outcry from Liberal and Nationals MPs over the idea of a new provision of the constitution that might gain more power over time through the courts.

The government’s position slams the door on Indigenous leaders who called two years ago for the establishment of a “First Nations Voice enshrined in the constitution” to rectify decades of powerlessness.

Government shuts down calls to enshrine Indigenous ‘voice’ in constitution